The alluring of float festivals in Tokai City

Many of these floats were built in the late Edo period with history going back approximately 210 years. They are still carefully maintained by members of each festival preservation group and by local residents. Take a look back into history through the history of these 9 floats.

Mechanical dolls sitting on each of the 9 floats each do different things: write, do headstands, draw a bow, etc. Marvel at the sophisticated technology of the Edo Period.

The Awe of Donden (Donten)

Shafts of the front wheel are hoisted up and with the front wheel afloat, and the float is spun around with vigor. This is called Donden (or Donten) and is the finale of the float festival which is accompanied by music, and scattering of confetti from the small cabin structure on top. You’ll be overwhelmed by the energetic cheers of the float carriers.

The Ota Festival is held concurrently with the annual celebration of Omiya Shrine. It is a grand festival with 4 huge floats, each weighing approximately 5 tons, parading down the street with music. The highlight of the festival is Donden; carrying the float and spinning it around. The sight of the floats being spun around so many times is truly a sight to behold. Performances of mechanical dolls are another event not to be missed!

The Owari Yokosuka Festival is held concurrently with the annual celebration of Atago Shrine. Floats leave Atago Shrine and are drawn down the town’s streets; after reaching the Donten area, the floats are turned around and return to Atago Shrine. After making an offering of mechan ical dolls and music, the grand finale, called“ Daidonten,” begins. Carrying and carefully spinning the floats around and around without hitting anything, the float carrier teams compete for the honor and prestige of being the most skilled performers. At night, lanterns are hung and the night festival begins.

Learn the History and Culture

In the hall there is the “Heishu Memorial Exhibition Room,” where Heishu's paintings and writings are on exhibit, the “Heishu Hall,”
an information section, and the Oumeikan, a lecture hall named after the school he opened in Edo.
It is a memorial hall where you can relive the teachings of Heishu Hosoi. His words in calligraphy writing still touch the hearts of those who read them.

Born in Tokai City, Aichi, he was a scholar who signicantly inuenced school and social education in the domain. He is particularly famous for being the rst principal of Owari Domain’ s Meirindo School, and the teacher of Harunori (Yozan) Uesugi, the lord of the Yonezawa Domain. He is the pride of Tokai City as one of the great men originating from the city. Tokai City has made a sister city agreement with Yonezawa City (the city Harunori Uesugi originated from). The words Heishu Hosoi sent to Harunori Uesugi, “Yunarukana yunarukana yuniarazushite naniwomotte okonawanya” meaning “Whatever you do, you must have courage” became the root of the cultural institution “Yunaru.” Heishu Hosoi is the model for Tokai City’ s character, “Heishu-kun.”

It is a designated cultural asset of Tokai City! Ever since a uddhist ceremony to consecrate a newly-constructed Buddha statue was held in 1927 to commemorate the marriage of Emperor Showa, the statue of Buddha has stood as a symbol of Tokai City very much loved by its residents.

Oumeian, standing on the hill of the Shuurakuen Park, is a tea ceremony room named after a school opened in Edo by Heishu Hosoi. How about enjoying “maccha” while looking at the garden that changes scenery every season?

The 82nd temple of the Chita Shikoku pilgrimage. The palace in the main hall is designated a national cultural asset as it showcases the construction technology of the Kamakura Period. The principle Buddha statue called “Ekadasamukha (eleven-faced Kannon Bosatsu),” which is not ordinarily open to the public, and the main hall are designated prefectural cultural assets.

Historical sites include ruins such as shell mounds, settlement remains, castle remains and tumulus that are of high historical and academic value and designated as important cultural assets by the national and local government. Some of these are found in the most unexpected places too! 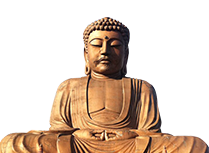